Windows 3.1 is a desktop operating systems made by Microsoft that runs on Intel 80x86.

server/mainframe: Only very low end servers can run on this operating system. 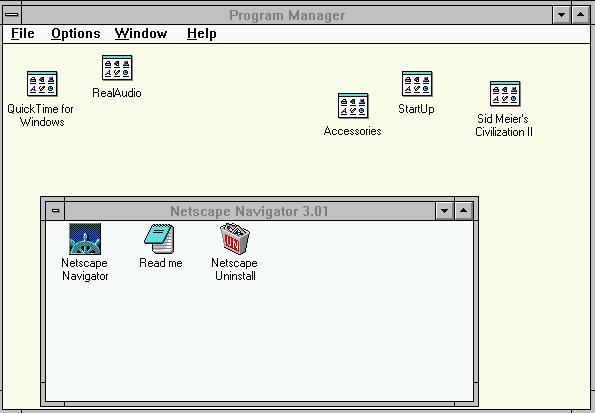 “Older operating systems, some of which largely predated the mass exodus of businesses to the Internet, such as Windows 3.x, are highly vulnerable, says Lynn Bernstein, president of ECG Consulting Inc., in Montclair, NJ.” —Joe Paone, MicroTimes; Oct 8, 2001m6

“As Windows users are being plagued by computer viruses, spam, buggy software, and Web pop-up ads, some are questioning why the Redmond, Wash.-based software behemoth has failed to integrate security and repair features that could make computers less prone to problems.
“ ‘Microsoft has added lots of bells and whistles to Windows to protect their operating system franchise over the years, but when it comes to Windows security and reliability, they’ve done comparitively little until recently,’ said Alan Paller, director of research at the SANS Institute, a Bethesda, Md.-based computer security and training organization.
“ ‘It’s like they are selling faster cars with more powerful engines but leaving off the seat belts and air bags — all those critical things that make customers safe when using their products,’ he added.
“Microsoft’s critics say the reason the company isn’t eager to add security features is simple: Doing so wouldn’t help it fend off competitors whose products could undermine the spread of Windows.
“ ‘You would think there would be money to be made in Microsoft having some kind of more effective antiviral program of their own,’ said Andrew Gavil, an antitrust expert and law professor at Howard University. ‘But virus programs don’t present any threat to their operating system monopoly.’ ” —Los Angeles Times, “Microsoft Runs Into Bundling Dilemma”, March 27, 2004n4

Microsoft falsely claimed that it would make security a company-wide priority in its much publicized 2002 “trustworthy computing initiaitve”. Since then, Microsoft Windows (all versions) has become even more vulnerable to viruses and other internet attacks. Security is a purposely false and misleading marketing slogan at Microsoft.

“Ironically, some experts say, product bundling is partly to blame for Windows’ security woes.
“Lee A. Hollaar, a computer science professor at University of Utah, said the widespread proliferation of the Melissa computer virus stemmed from the tight integration of Microsoft’s Outlook e-mail program with its writing application, Word.
“ ‘The Melissa virus exists only because Microsoft expanded Word documents to contain functions that let it access the Outlook address book’, Hollaar said.
“Similarly, he explained, when the Internet Explorer Web browser was folded into the operating system, it exposed Windows to greater security risks from the Net.’ ” —Los Angeles Times, “Microsoft Runs Into Bundling Dilemma”, March 27, 2004n4

“Microsoft enjoyed its great success not because it had great software but because people were stuck with it. Market domination, not innovation, drove the company’s success,” wrote James Wallace in the book “Overdrive: Bill Gates and the Race to Control Cyberspace”, John Wiley & Sons, September 1997.

“Windows machines have advantages, too, such as more configuration options, cheaper up front cost, availability of software, snappier response on window controls, cheaper components, more peripherals.” —Why Monopolies Are Bad, by Jeff Adkinsw77

Commentary: Quite simply, Windows guarantees more work for the M.I.S. departments — because it computers require far more technical support to do the same work. And when the M.I.S. departments make computer recommendations to management, they tend to look out for their own job security over the best interests of the business. The same reason that many retail stores also push Wintel machines — it guarantees more work for their highly profitable service departments.

Study after study has shown that Macintoshes are less expensive to support and maintain than Wintel machines. Wintel computers typically cost four to 10 times as much in support costs. Even Intel’s own internal study showed that it was costing them four times as much to support Windows machines as it did to support their Macintoshes (yes, Intel used Macintoshes for mission critical work — and since that study they have been expanding their use of Macintoshes).

Independent studies over the years continually show that worker productivity is substantially higher on Macintoshes than on Wintel computers. And the difference is greatest in the creative fields (pre-press, illustration, digital photography, 2-D and 3-D animation, 3-D modelling and rendering, film special effects, broadcast video editting, CD-ROM production, multi-media, music composition and performance, sound editting, and web site production), where the Macintosh is the most prevalent computer (even more than the high end graphics work stations — and Macintosh OS X (formerly Rhapsody) brings the Macintosh to the high end graphics work stations). Macintosh OS X is numerically the most used form of

Ethics: Bill Gates is a longtime member of the Augusta National Golf Club, the official site of the Masters Golf Tournament. The Augusta National Golf Club refuses to allow any women join their club and for decades refused to allow Blacks, Hispanics, and other minorities to join, only relenting in 1990 to allow a few token Black members when facing criminal charges for Civil Rights violations. The only reason that Microsoft hires women and minorities is because of tough federal Civil Rights laws. If you are a woman, Black, Hispanic, Asian, or a member of any other minority group, remember that Bill Gates and Microsoft hate you and only take your money becuase they are forced to by law. 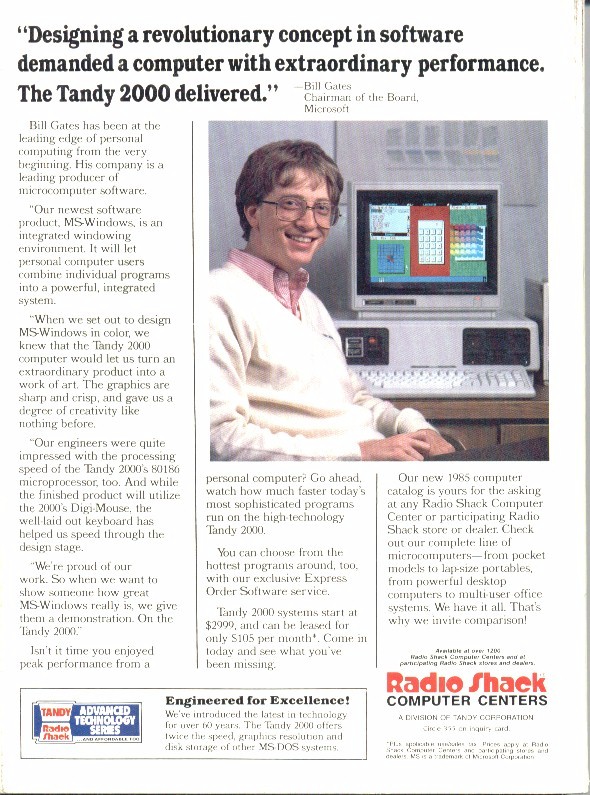 Note: I am looking for a fan of Windows who has the time to check this web site for completeness and accuracy regarding Windows. Just check through the site about once a week or so and report back with any information (including the URL of the web page you are reporting).