Macintosh OS X (ten) is a desktop operating system based on Rhapsody. Macintosh OS X is made by Apple Computer and will run on Motorola/IBM PowerPC.


Macintosh OS X is essentially Rhapsody 3.0 optimized for Apple’s PowerPC computers, a high powered UNIX† with the friendly face of the Macintosh.

“Mac OS X is the most important software from Apple since the original Macintosh operating system in 1984 that revolutionized the entire industry. We can’t wait for Mac users around the globe to experience its stability, power and elegance.” —Steve Jobs, Apple’s CEO

“Forget a dual operating system strategy. In his keynote address at Apple’s 1998 Worldwide Developer Conference, Steve Jobs, Apple’s interim CEO, says all the company’s operating system plans are converging into one entity: Mac OS X (10), due next year [it actually arrived three years later].
“Mac OS 8 and Rhapsody will be the “parents” of Mac OS X, due the third quarter of 1999. The best parts of Rhapsody will be integrated into the Mac OS to make it a modern operating system. [NOTE: These dates slipped to first quarter 2001.]
“Mac OS X will be targeted for G3 systems and their predecessors; all shipping products will run Mac OS X. It will be 100% PowerPC native; all 68k code will be excised. The upcoming OS is slated to have protected memory, enhanced virtual memory (with no more fixed size heaps), preemptive multitasking, fast networking, and fast file I/O. It will also run Mac OS 8 compatible applications transparently [it ended up running Mac OS 9 applications that were updated to Carbon and didn’t involve access to hardware].” —Dennis Sellers, “The X-Files: Rhapsody, Allegro + Sonata = Mac OS 10”e30

“Mac OS X the biggest leap in the Mac OS since 1984, bringing it into new territory, but bringing all of us and current applications with it.” —Steve Jobse30

“Under the appealing, easy-to-use interface is a rock-solid foundation — an industrial-strength core OS engineered for stability, reliability, and phenomenal performance.” — Apple Computerw56

Much of the underpinnings of Mac OS X (MACH, FreeBSD, etc.) are open source projects.

“The open source community helped bring you the core OS. Feel free to pitch in and contribute your programming talents.” — Apple Computerw56

“After protests that Apple was illegally violating the open source requirement to make available their enhancements, Apple finally released those underpinnings as Darwin, while continueing to keep higher level components a proprietary secret (and compounding their lack of ethics by falsely claiming that they were making their operating system open source while only making a small part open source) and simultaneously releasing the open source portions with a highly restrictive license that includes the option for Apple to revoke permission to use the code at any time at any whim, going against the very meaning of open source.” —a developer who requested his name be kept private

“I expect there’s some work to port a Unix app to MacOS X, especially one that uses any of the Unix System-V APIs. BSD-flavored apps should port easily to MacOS X. Of course, the windowing systems of Unix and MacOS X are completely different, so don’t expect to easily port any X-windows apps.” — Steve Byane59

“I just got 10.1, and WOW. I knew I was going to get a lot more speed, but GEEZ! My PBG4/500 FLIES now. DVD playback was almost flawless in 9.x (unless you were running a lot of apps in the background). It *IS* flawless in 10.1. I was watching it full screen in the background while using AOL Instant Messenger (which munches processor cycles like a Pentium eats electricity), and it was PERFECT.” — Kynan Shook

“It would certainly be nice if Apple Computer ever got some documentation out to developers on Quartz. So far, nothing is available. The WWDC session totally lacked any detail, much less having things like an API. They just point you to the Postscript and PDF specs, on which it is based. (Quartz is somewhat modified from these.) That still doesn’t qualify as an API or programmer-useful documentation. This is probably the area of Mac OSX where the developer need is the greatest and the information the least forthcoming. (If you can’t draw, you can’t do anything.)”

“The Aqua interface brings your Mac to life with color, depth, translucence, and fluid motion — and keeps you on top of things with continuous visual feedback.” — Apple Computerw56

“Aqua is what Eazel, Gnome, KDE, and all the rest of the we-make-it-easy Linux GUI crowd can only dream about. I find Aqua’s design light-years ahead of any other GUI on the market, which goes for both Linux and MS Windows.” —“X a perfect X”, Open (a Linux e-business magazine)m4 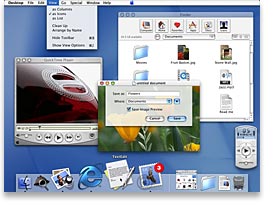 “With Mac OS X featuring numerous advances, it’s the job of the new Finder to ease your transition to the next level of computing. Navigating your Mac and the Internet has never been easier.” —Apple Computerw56

blind: keyboard can be used to access the menu bar, the dock, palettes, toolbars, and window controls

deaf: system alert sound can be replaced by having the menu bar flash

“Mac OS X combines a host of powerful features and technologies — plus iTools, Sherlock, and QuickTime TV — to give you more of what you want from the Internet.” — Apple Computerw56

“The killer app of the Internet gets compelling new features and capabilities. It’s called Mail, and it’s a full-featured email application built from the ground up as an integral part of Mac OS X.” — Apple Computerw56

“Macs have many advantages: ease of use, integration of OS and hardware, reliability, overall lower cost of ownership over the life of the machine, and, of course, style.” —Why Monopolies Are Bad, by Jeff Adkinsw77

Also see the summary at Macintosh.

1.1 MB QuickTime movie of Bill Gates explaining why he thinks the Macintosh is the best operating system.

Note: I am looking for a fan of Mac OS X who has the time to check this web site for completeness and accuracy regarding Mac OS X. Just check through the site about once a week or so and report back with any information (including the URL of the web page you are reporting).