“As you may already know, UNIX is not a single operating system; it refers to a family of operating systems which includes AIX, BSDI, FreeBSD, HP-UX, IRIX, Linux, NetBSD, OpenBSD, Pyramid, SCO (UnixWare and OpenServer), Solaris, SunOS, Tru64 UNIX, just to name the more prominent ones.” —Microsoft Windows NT Server 4.0 versus UNIX w51

The following operating systems are variations of UNIX†:

UNIX was orginally developed in a laboratory at AT&T’s Bell Telephone Laboratories (now an independent corporation known as Lucent Technologies) by Kenneth Thompson and Dennis Ritchie in 1969. At the time, AT&T was prohibited from selling computers or software, but was allowed to develop its own software and computers for internal use. A few newly hired engineers were unable to get valuable mainframe computer time because of lack of seniority and resorted to writing their own operating system (UNIX) and programming language (C) to run on an unused mainframe computer still in the original box (the manufacturer had gone out of business before shipping an operating system).

In 1970 Ken Thompson of AT&T Bell Labs suggested the name “Unix” for the new operating system that had been under development since 1969. The name was an intentional pun on AT&T’s earlier Multics project (uni- means “one”, multi- means “many”).

In 1973 the kernel of Unix was rewritten in the C programming language. This made Unix the world’s first portable operating system, capable of being easily ported (moved) to any hardware. This was a major advantage for Unix and led to its widespread use in the multi-platform environments of colleges and universities.

AT&T’s consent decree with the U.S. Justice Department on monopoly charges was interpretted as allowing AT&T to release UNIX as an open source operating system for academic use. Ken Thompson, one of the originators of UNIX, took UNIX to the University of California, Berkeley, where students quickly started making improvements and modifications, leading to the world famous Berkeley Standard Distribution (BSD) form of UNIX.

Ken Thompson, on how he started writing UNIX: “I allocated a week each to the operating system, the shell, the editor, and the assembler… Yeah, essentially one person for a month.”e116

UNIX quickly spread throughout the academic world, as it solved the problem of keeping track of many (sometimes dozens) of proprietary operating systems on university computers. With UNIX, all of the computers from many different manufacturers could run the same operating system and share the same programs (recompiled on each processor).

“Unix was originally developed by AT&T. They shared their source with the University of California at Berkeley. BSD (Berkeley Software Distribution) is the Unix that evolved at UC-Berkeley. Note that the xBSD (FreeBSD, OpenBSD, NetBSD) distributions are all free of any AT&T code. AT&T continued development of its Unix for a while, and that finished with System V. Several years ago, the various Unix vendors (AT&T, Sun, HP, and others) pledged to bridge the incompatibilities between their versions. This is what System V Release 4 (SVR4) refers to the ‘standard’ that they created.” — Mukesh Agrawale58

When AT&T settled yet another monopoly case, the company was broken up into “Baby Bells” (the regional companies operating local phone service) and the central company (which had the long distance business and Bell Labs). AT&T (as well as the Baby Bells) was allowed to enter the computer business. AT&T gave academia a specific deadline to stop using “encumbered code” (that is, any of AT&T’s source code anywhere in their versions of UNIX).

This led to the development of free open source projects such as FreeBSD, NetBSD, and OpenBSD, as well as commercial operating systems based on the BSD code.

“Unix is a trademark that was transferred by Novell Unixware (the result of Novell’s purchase of AT&T Bell Lab’s Unix group) to the non-profit X/Open Company, Ltd, and is now apparently owned by ‘The Open Group’ (the result of a merger between X/Open and OSF). To get their permission to call a product ‘Unix’, The Open Group requires one to pass a number of validation suites that check conformance of APIs, commands and utilities, and the C compiler.” — Steve Byane56 (See also: http://www.opengroup.org/testing/checklist/u98brand.html)

“Vendors such as Sun, IBM, DEC, SCO, and HP modified Unix to differentiate their products. This splintered Unix to a degree, though not quite as much as is usually perceived. Necessity being the mother of invention, programmers have created development tools that help them work around the differences between Unix flavors. As a result, there is a large body of software based on source code that will automatically configure itself to compile on most Unix platforms, including Intel-based Unix.

Regardless, Microsoft would leverage the perception that Unix is splintered beyond hope, and present Windows NT as a more consistent multi-platform alternative.” —Nicholas Petreley, “The new Unix alters NT’s orbit”, NC Worldw74

To date, the most widely used desktop version of UNIX is Apple’s Mac OS X, combining the ground breaking object oriented NeXT with some of the user interface of the Macintosh.

“The trademark is transfered by Novell, not ‘Novel Unixware’. UnixWare is an Operating System, not a group And UnixWare as well as the UNIX source code (the original AT&T one) was puchased by SCO from Novell in 1995.” — Nasser K. Maneshe116

“Also unless an operating system has officially passed the X/OPEN UNIX branding, it can not be considered a UNIX. It can only be considered to be UNIX like or compatible. Because UNIX is a registered trademark of X/OPEN, this is a legal issue. In trademark law, the owner of a trademark must prosecute any known generic use of their trademark or they can lose their trademark. I know it seems petty, but that is the way the U.S. legal system works.” — John Malmberge85†

“Unix is making a comeback on several fronts. The Internet is Unix. It was built on Unix. It has drawn attention to Unix. And today’s college graduates were weaned on Unix as a result. This is the generation that is now entering the IT workplace. And eventually they will be IT managers.” —Nicholas Petreley, “The new Unix alters NT’s orbit”, NC Worldw74

“UNIX is a mature, technically superior group of operating systems with a proven track record for performance, reliability, and security in a server environment. The almost thirty years of continual development, performed often by volunteers who believe in what they’re doing, has produced a group of operating systems—and extremely powerful multiprocessor server hardware tailor-made to its needs, whose performance is still unparalleled by Intel hardware—that not only meets the demands of today’s computing needs, but in many cases exceeds them.” —Microsoft Windows NT Server 4.0 versus UNIX w51 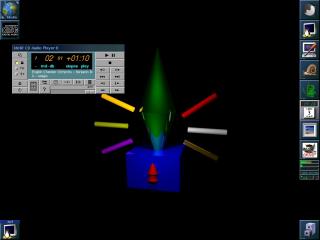 In 1983 the University of California at Berkeley released a version of UNIX that included TCP/IP.

See listings under each UNIX operating system (above).

Actually, unix is a very user-friendly system. It’s just that it is particular about which users it chooses to be friendly with.

NOTE: I am looking for a fan of UNIX who has the time to check this web site for completeness and accuracy regarding UNIX. Just check through the site about once a week or so and report back with any information (including the URL of the web page you are reporting).